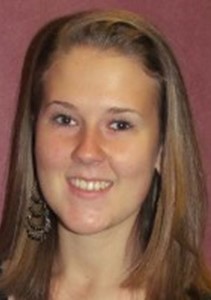 Veronica Zieba was diagnosed with sensorinueral hearing loss at four years old. The most challenging aspect of her hearing loss was socializing with fellow students as they did not understand her condition. Veronica, now a former class president, remembers being told “never mind” or “Oh, it’s not important” after asking a classmate to repeat a statement. She always wore her hair down and abhorred her FM amplification system. Over the years, Veronica learned to be appreciative of her “differences.” She now wears her hair up, unafraid to expose her hearing aids. She has also become involved in the marching band, theater, and sports. As a leader among her peers, in her community, and as one of the top students in her class, Veronica believes her “disability is not an excuse to not go after [her] dreams and goals.”