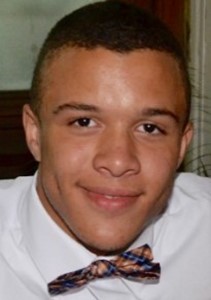 Terrence explains that after a nearly two-decade civil war, the lion population in Gorongosa National Park in Mozambique, Africa, declined from 500 lions in 1975 to 35 lions in 2007. Nearly a third of the lion population was lost to a canine distemper epidemic in 1974. Terrence notes that the equipment to process blood samples from lions in an effort to reduce diseases had not previously been accessible. Therefore, Terrence spearheaded a fundraiser, gathered lab equipment from a local university, wrote standard operating procedures for the laboratory, and began training biology interns. He donated samples of his own blood for his interns to practice blood-processing techniques. Many of Terrance’s interns will be first-generation wildlife biology scientists. Terrence is a devoted volunteer and an accomplished basketball player–having been named the most valuable player by multiple leagues. He has also served as an intern for the Center for Infectious Disease Research at the Catholic University of Mozambique.