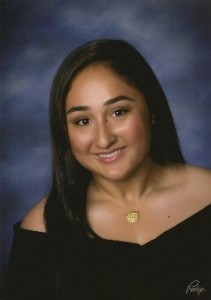 After finding insurmountable joy in music, Sara dared to teach a deaf student she tutors in creative writing how to play the flute. Sara believed that music would be a remedy to the darkness her student often conveyed in her writing. Sara instructed her student to practice the flute against the wall so that she could feel the air blow back into her face. Sara also designed a device the taps rhythms on her student’s leg, and she coded a program that displays patterns, colors, and shapes which reflect playing style. Sara’s student soon began to play the flute flawlessly as she too indulged in a love of music. Sara has participated in Girls Who Code Summer Immersion at the Facebook Headquarters. She is an assistant at Burlingame Sports and Orthopedic Medicine Associates, and she is the founder and president of Let’s Erase the Stigma, an organization that promotes awareness of mental illnesses. Sara is a four-year member of the marching band, and she is president of Club Italiano.