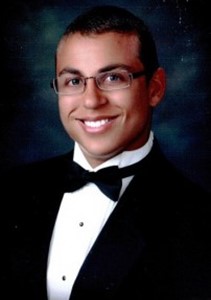 Nicholas Finks intends to major in nuclear engineering.  He has served as his junior class president and has earned the title of Assistant Lead Petty Officer in his U.S. Naval Sea Cadet Corp squadron. He has been captain of his school’s gymnastics team for four years, encouraging and helping his teammates to excel in both academics and athletics.   He formed his school’s first Anti-Bullying club as a freshman, and volunteers his time as a motivational speaker at local middle schools. His leadership skills exemplify one of  his strongest beliefs about leadership: “A good leader should always take responsibility for the actions of his/her team, accepting fault for any public criticism, but never solely accepting praise for any accomplishments.” He plans to attend the U.S. Naval Academy.