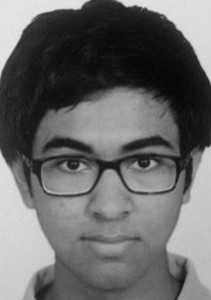 While preparing for competition at the Earth Science Olympiad, Neel realized the devastating effect of polythene on the environment. Neel endeavored to spearhead the “Polythene Free Mumbai” awareness campaign. He held pop-up workshops at local schools, housing societies, vegetable markets, and family gatherings. Neel has also created social media pages to help publicize his cause and has helped to gather over 10,000 polythene bags in seven months. Neel’s initiatives have been featured in the Times of India, the largest-selling Indian newspaper. Neel represented India at the International Earth Science Olympiad at Brazil and received India’s first gold medal since the country began participating in 2007. Neel is also a top competitor in chess, squash, and swimming. He also organized an eye donation camp and founded a Yoga Club.