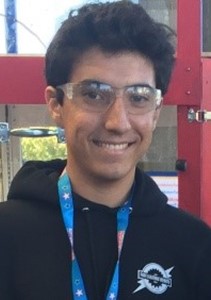 As a young child, Matthew fell in love with ABC’s television show, BattleBots. He soon developed a passion for constructing and programming his own robots. At just 12 years old, Matthew was contacted by the team captain from the University of Toronto Robotics Association about serving as his team’s driver during his absence at the International Robogames. Matthew has competed against robotics teams from UCLA, MIT, USC and Harvey Mudd College. As a high school junior, Matthew was invited to compete on ABC’s BattleBots television show. He has also worked with NASA astronauts, JPL rocket scientists, MIT professors and SpaceX engineers. Matthew has spoken and presented at multiple STEM events and recently gave a TEDx Talk to high school students. He is a member of the National Robotics League and has served as an intern for Meggitt Safety Systems.