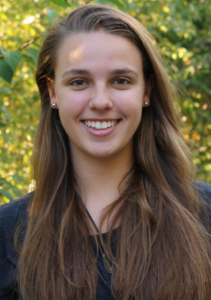 Once Katalina became president of her school’s Gay-Straight Alliance Club, membership doubled due to her establishment of a supportive, inclusive environment. Katalina raises awareness about bullying and issues affecting LBGTQ teens in her all-girls school and also in their brother school. The GSA Club has held Ally Week, No-Name Calling Week, Day of Silence, movie nights, open mic events, and numerous school assemblies. Katalina was one of fifty young women chosen nationwide to attend the ANNpower Leadership Conference in Washington, D.C. She proposed the creation of a social space for LBGTQ teens, and she applied for and received a $2,500 grant to launch the Queer Students Organization for schools in her community. Katalina has joined the Student Organizing Team and Board of Connecticut’s Gay, Lesbian, and Straight Education Network. Last March, Katalina conducted two workshops, “The Problems Queer Youth Face in Single-Sex Schools” and “LGBT+ Erasure in History & Media,” at the True Colors National Conference. She is also captain of the varsity fencing team, co-editor-in-chief of the student newspaper, and she is a Robotics Team member.