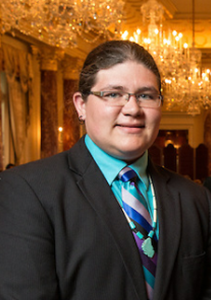 ahkota recalls being ridiculed for his appreciation of his Miwok, Concow, and Yuki heritage as a third grader. He explains that by the eighth grade, he had become accustomed to overlooking offensive statements made during competitive events against teams with race-based mascots, such as the Redskins. In July of 2014, Dahkota shared the experiences of Native American students at the Center for American Progress. He has gathered over 200 signatures in support of changing race-based mascots and logos. Dahkota worked on Assembly Bill 30, The California Racial Mascots Act.  California’s governor signed the bill in October of 2015. Dahkota is the founder of the nonprofit organization NERDS, Native Education Raising Dedicated Students. He is a six-year member of the Student Council, an executive board member for The Center for Native American Youth, and an NSHSS Ambassador.